Day 2 of Learning to Fly…

Thought I would post up what a learned today…

But I need to start with something that happened yesterday. As I mentioned in my previous post, I wasn’t able to fly much because of the low cloud ceiling and my instructor mentioned it was because of the dew-point.    hmmmm I thought to myself, I need to know what he is talking about.

What happened yesterday is basically as follows:
– During the night, when the temperature of the air is reduced to the dew point, the air is completely saturated and that moisture begins to condense out of the air in the form of fog or dew, frost etc..

– The sun comes up and heats up the ground (and the dew on it) and what does hot air do? It rises….

– Also, we know that as you go up in altitude, the air is cooler right?… so again, when the temperature of the air reduces to the dew point – what happens? It condenses… and you get clouds….

Now my question is at what altitude are those clouds? If it is above where we are generally flying – say 3000′.. no problem, I’ll never get above the clouds – can I figure this out without having to take off in a plane? Yes I can – here is how:

– The dew point temperature decreases at a rate of 1 degree F per 1000 feet.

– If I subtract those two numbers I get a convergence rate of 4.4 degrees F.

I can now apply the convergence rate to the reported outside temperature and dew point to determine the height of the cloud base.

– I called the Denton airport and they have an automated system for pilots that provides all kinds of great info such as the current temperature and the current dew point. So armed with this info, I can easily know exactly at what altitude – if there is enough moisture in the air, clouds will begin to form.

I did the following calculation before I arrived to fly this morning:

Basically how far will the warming air have to raise before it hits that saturation point (the dew point) to start condensing forming fog or clouds etc…?

So I can divide this difference or spread by our convergence rate and multiple by 1000 ‘.

Clouds, if there was enough moisture in the air would start forming at 1,227 feet.

By the way – here are a couple more pics of the plane I’m flying: (click on the images to see them full screen) 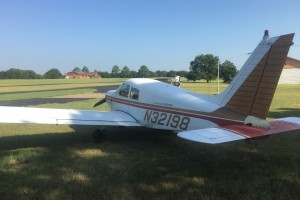