This is my first blog entry on learning to fly. Flying is something I’ve wanted to do for a long time – I remember back when we lived on North County Line Road, I almost purchased a twin-engine Cessna… as if I had any business buying a twin-engine plane without ever having taken a single lesson – wiser heads prevailed, well… ‘wiser head prevailed’ concerning buying that plane, however I wish now I had gone ahead and starting working toward my license. 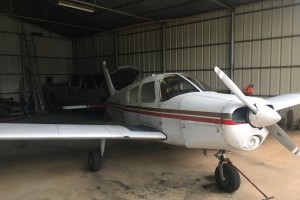 As my first post – I guess I should define why I wanted to start adding blog entries in the first place.

I guess first and foremost, I really want to be a great pilot – which means I need to remember what I’m taught. Having a place to ‘regurgitate’ (this is Caney Creek Farm btw) what I’m learning hopefully will help me remember.

So, what are the big take-aways so far?

Assumptions are a killer – literally. Example: one of the ‘Run-Up’ steps is ‘Flaps Down’. So I dutifully grabbed the level used to put the flaps down, carefully pulling it up to the second click (listening for the tell-tell two clicks) and went on to the next item – my instructor would have none of that. I’d just made the assumption the lever worked –  “You didn’t look to make sure the flaps were actually down”. Dang.. ok, so I lowered the lever and again pulled it up while looking over my left shoulder at the wing, making sure the flap was in fact down, and again moved on to the next item – nope…. “You didn’t look at both flaps”…. Again, I just made the assumption that both flaps went down. If neither worked, or if only one flap worked, me being a rookie pilot, I could have easy wrecked on take-off – just from a stupid assumption that since I’d heard the ‘clicks’ from the lever, the flaps must in fact be down.

(in case you don’t know, a plane gets ‘lift’ because of how the wing is designed (flat on the bottom but the top is curved). Below is a pretty good video on lift. Flaps increase the ‘curve’ area of the wing for added ‘lift’ during take-off and landing.

How a plane gets ‘lift’

Another one of the Run-Up items is: ‘Seat belts fastened’. I checked mine and went on to the next item. My instructor again would have none of that. “You are responsible for your passengers and you didn’t look to make sure my seat belt was fastened…”. I just made the assumption that he had his seat belt on.

2. Always have a back-up plan…

When we took off today, we actually only circled and came right back and landed. There was a slight cloud layer at about 1500 feet – that once airborne, it was clear I would have to fly through and over those clouds. Nope, that’s a big no-no for someone without an instrument license.  What would happen if those clouds thicken and closed up under me… I’d have no way to safely land again. While that was an important lesson – what we had already talked about what I would do if I needed to abort or how I would circle and land. I already had a back-up plan in case something didn’t go right – which it didn’t.

3. Flying is not something you can learn reading a book…

You can read all the ‘learn to fly’ books on Amazon – but man when on the ground, it is weird to steer the plane with your feet and use a hand brake to stop. That is only something you can learn to do with practice. It reminds me a bit of that scene from Good Will Hunting – where Robbin Williams and Matt Damon are sitting on the park bench and Williams says:

“If I asked you about art, you’d probably give me the skinny on every art book ever written. Michelangelo, you know a lot about him. Life’s work, political aspirations, him and the pope, sexual orientations, the whole works, right? But I’ll bet you can’t tell me what it smells like in the Sistine Chapel. You’ve never actually stood there and looked up at that beautiful ceiling.

Flying is like that – you have to do it, over and over to master each part.

Learning to fly is serious business… a student pilot needs to pickup on as much as possible – every detail, off-hand comment etc… – who knows when one detail could make a critical difference.